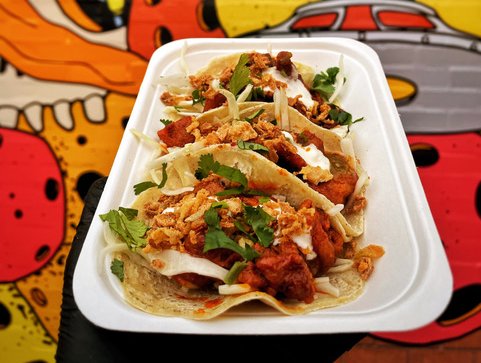 Returning to the Camp Bestival Feast Collective Tent once again after their sensational premiere last year, Mexican Seoul have been making waves across London Street Food markets and UK Festivals since its conception back in 2020.

Fusing together sweet Korean BBQ with fiery Mexican flavour - they specialise in Tacos and award-winning Chicken Wings (after competing in the world’s largest Chicken Wing competition and taking home 3 awards!)

Since then, things have gone from strength to strength and Mexican Seoul have toured their food across festivals including Camp Bestival, Wingjam and being voted the 2nd Best Food Trader at The Big Feastival. They have also catered for brands such as NFL UK, Redbull Formula 1 Racing and Netflix.

Love wings? Love Tacos? Got Seoul? Head to the Feast Collective to get your fix!

The Feast Collective curated by Fred Sirieix and The Little Gloster