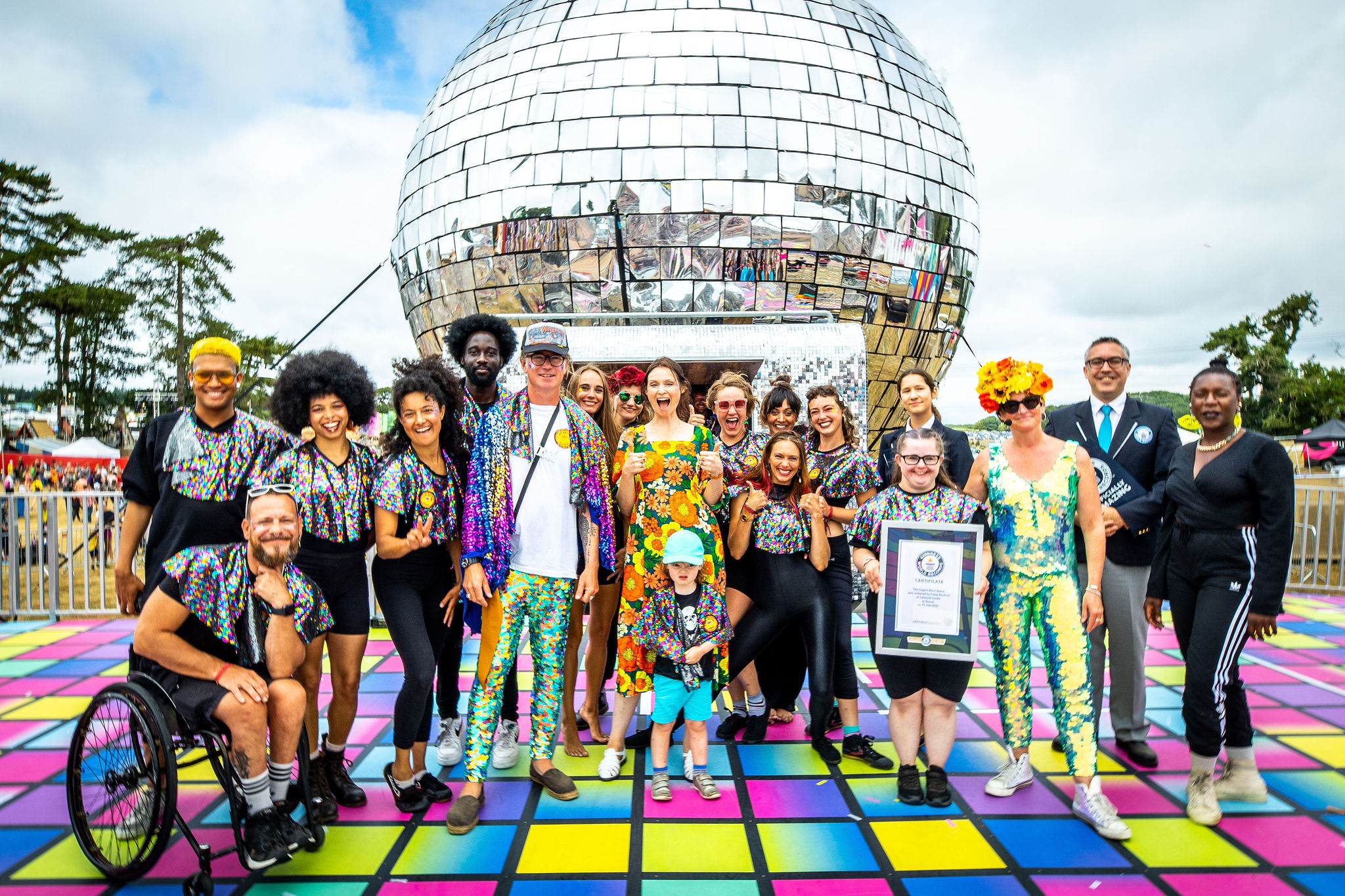 Wow! It's offical!! Camp Bestival has officially broken the GUINNESS WORLD RECORDS title for the Largest Disco Dance, hosted by non-other than the ultimate queen of the Kitchen Disco Sophie Ellis-Bextor and Camp Bestival curator’s Rob and Josie da Bank.

The record was verified by GUINNESS WORLD RECORDS adjudicator Jack Brockbank & Anouk de Timary after the official count, smashing the previous record by over 274.

Breaking a world record title is no mean feat and in true Camp Bestival style the festival was determined to give as many Camp Bestival go-ers as possible the chance to become record breakers regardless of age or ability. The spectacular sight of Dorset’s best groovers and movers brilliantly showcased the pure joy and fun that Camp Bestival brings to its festival-family year after year.

The official dance was led by Diverse City founder and disco champion, Claire Hodgson MBE, to the soundtrack of Sister Sledge’s disco anthem “We Are Family”, and choreographed by fellow disco champion and brother, Tom Hodgson. Claire was awarded an MBE in 2016 for services to inclusion in the Performing Arts and continues to be an inspiration to many with her dedication to all things disco. Rehearsal workshops were available throughout the festival to help learn the official dance, as well as step-by-step video tutorials shared in advance.

“From my own Kitchen Disco to a fully-fledged all-sequin disco extravaganza in the glorious grounds of Lulworth Castle, I am so thrilled to have played a sparkling part in helping Camp Bestival achieve the official GUINNESS WORLD RECORDS title for the Largest Disco Dance. Congratulations to all you fabulous disco Kings and Queens!” Sophie Ellis-Bextor

Speaking on the GUINNESS WORLD RECORDS title achievement, said: “Camp Bestival Dorset festival goers are record breakers! We are thrilled to have broken the GUINNESS WORLD RECORDS for the Largest Disco Dance in true Camp Bestival style. It was amazing to see families and people of all ages come together and show off their best disco moves under the dazzling glitter ball. As well as having a huge amount of fun, we’re incredibly proud that the attempt has raised funds for the Ellen MacArthur Cancer Trust. Huge congratulations to all dancers involved!” Camp Bestival curator Rob da Bank

“Choreographing and leading an attempt for the  Largest Disco Dance with my sister, Kim, and brother, Tom, was a dream come true! Disco occupies a massive part of my life and it was truly inspiring to see so many dancers of all ages and abilities coming together to dance, laugh, and celebrate breaking the record together.” Diverse City founder, Claire Hodgson MBE

“Wow what an incredible day! Camp Bestival is always one of our favourite weekends of the year and being part of a new GUINNESS WORLD RECORD has made this one extra special. We had so much fun seeing everyone get their groove on and having an awesome time to help more young people believe in a brighter future living through and beyond cancer. It was wonderful welcoming everyone who took part in the disco dance and we cannot thank them all enough.” Lindsay Nehorai, Fundraising Manager, Ellen MacArthur Cancer Trust

A Storyteller, A Drag Queen & A Parenting Psychologist Walk Into A Literary Institute Tent

Explore Your Wellbeing at Slow Motion